Just as every Monday PEGIDA Munich gathered once again on September 31st. Only a little less then 70 had come to listen to talks by Heinz Meyer, Lukas Bals and Dan Eising. The route up and down Lindwurmstrasse was quite unspectacular – speeches held were deeply racist and slandering.

At the beginning of the rally Heinz Meyer projected a slate above the heads of the participants showing two pictures with the headline:

The picture below “Munich” displayed a supposing activist. According to Heinz Meyer this activist orders attacks and violent offences behind the scenes. Lukas Bals continued with the defamation holding up different politicians’ faces and colleague Robert Andreasch’s face as a halloween disguise.

Constraint of Freedom of Press

Once again Rolf H., known for brutally attacking a colleague in Nuremberg, kept trying to prevent journalists from documenting the demonstration. Either with flags, banners or his bare hand he tried to block lenses. Dan Eising that later spoke and predicted that Angela Merkel (german chancellor), Dieter Reiter (Munich mayor) and Tobias Bezler (journalist) will equally be punished by the anger of ‚the people‘ attacked two colleagues as he left the PEGIDA area supposedly to go to the bathroom. He also encouraged the agitation of PEGIDA Munich with neonazi party ‚Der III. Weg‘. 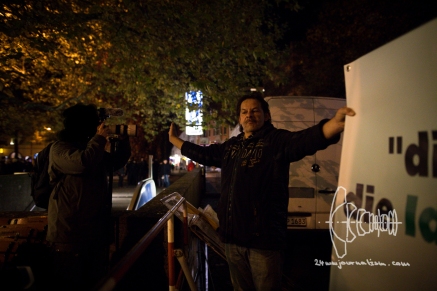 Rolf H. holding up a banner to prevent journalits from taking pictures.

Dan Eising leaving cage, seconds before he attacked one colleague and minutes later a second photographer.

Lukas Bals, known in Munich for trying to disturb a talk about the right-wing scene and attacking journalists at an AfD election party and nationally known for actions in NRW, is PEGIDA Munich’s new moderator since last week. Bals has repetively appeared at PEGIDA Munich first just participating, then serving as a marshall. His connections to the militant neonazi scene in Dortmund and reappereance accross far right events in Munich seem to make him a good candidate for the ‚job‘.

On Tuesday night (November 1st) Lukas Bals and Chris Ares appeared at the refugee’s hunger strike to shoot a vlog according to Lukas Bals Twitter profile. Accompanied by police they left Sendlinger Tor after one hour.

On Monday December 21st, once again the Munich branch of the racist PEGIDA movement marched through Munich -once again.
Very revealing : One participant carried a “REFUGEES NOT WLCOME”-flag next to the front transparent and was wearing a sweatshirt with a imperial eagle and “Deutschland” written on it. Another participant was wearing a “1312 – ACAB FOREVER” hoodie. Police took him into custody. As usual neo-nazis were spotted amongst the mass of racists.

Also this week PEGIDA showed pictures and movies on a projector next to the speakers – if all materials displayed were licensed can be doubted.

Munich police showed once again their approach to freedom of press. As approximately 50 counter-protestors blocked the PEGIDA route – that was therefore changed and PEGIDA was not blocked – police officers told press photographers that a documentation of the actions is not necessary. After asking for a press official or the operations management, the officers on site answered that this is ordered by mission control and photographers have to stay behind barrier. Police officers did not want to hand out their names to report this restriction of fundamental rights. Bypassing Munich citizens were allowed to approach the roadblock – only press photographers were held back.
Eye-whitnesses reported police brutality by forces of the USK (riot police force). Once again the Munich Police Departement showed what it’s approach on freedom of press is – what has to be hidden from cameras?.
As PEGIDA arrived back at Odeonsplatz, colleagues asked the police officer in service as mission control why he ordered that photographers should be held back – he stated that this must have had to do with the colleagues approach and way to talk to the police officers on site. Also he stated that he did not order that journalists should be held back.

“Germany is not colorful it’s endangered” states this participant, posing for cameras

Racist jokes on the PEGIDA screen

“REFUGEES NOT WELCOME” flag next to PEGIDA fronttransparent

Roadblock – closer approach was not possible.

View from the other side on the roadblock – passing is possible for civillians, but not for press photographers.