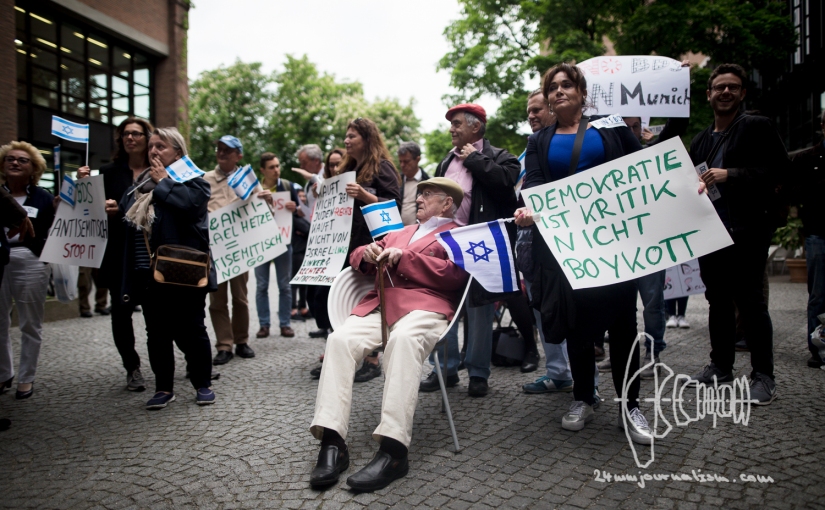 Almost two years ago the “Palästinensisch Jüdische Dialoggruppe München” hosted an event in the cultural munipicial center Gasteig about the campaign “BDS” asking for a boycott of Israeli goods as a reaction to the situation in the Gaza. 24mmjournalism reported from the event on that day. The situation for 24mmjournalism photographer & reporter Michi was quite absurde as the hosters first of repetively asked him if he was from the youth organisation of the ecological party – as they seemed to fear disturbation by this group. And also because the hosters accused him to have stolen all flyers and posters that were lying out on a table in front of the talk. This is especially absurde as the photographer was inside the talk until the very end and the discussion – which can be seen in th pictures embedded in the report embedded below.

Almost two years after the event of the ‘Jüdisch-Palästinensische Dialoggruppe‘ ending in trouble the group is allowed to return to the munipicial center. According to reports of the Süddeutsche Zeitung, the city checked possibilities to cancel the event but saw no option as the group only rented the rooms. 24mmjournalism’s photographer Michi was again on site to report on the event and counter-protest.

At the entrance of the Black-box 24mmjournalism was denied entry. One of the organizers greated with: “Look who is there, our thief friend” – referring to an absurde accusation made in 2015 to have stolen all informaton material. Trying to clear tthis with the organizers led to no goal. They advised to buy a ticket, but told 24mmjournalism right away, that taking photos inside would not be allowed. So even though we wanted to report about the sucseeding event to 2015 – and also changes and other approaches – we were denied. This is almost hillarious as Ben Kushka the speaker from the last talk eventhough we reported quite critical on his talk, stole a photo published on this blog (including the watermark) to mobilize for another talk on BDS by him.

One could think that if the speaker had no problem with using a picture from a critical report, why would the organizers have a problem with pictures taken. Also the group said, Michi pretended to be a photographer for a news-agency, he was not working for at that time or now, but his pictures of the talk could be found there via a sub-agency, distributing photos in several image-pools. 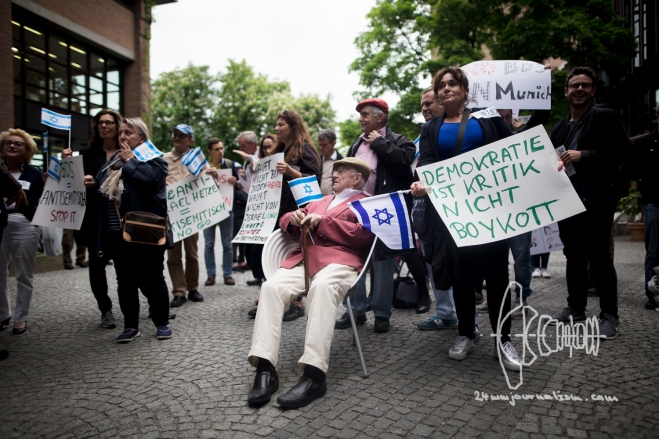 Just as last time, several people from the Jewish community as well as other activists gathered in front of the Gasteig to protest against “Antisemitism and Antizionism”. Several people later visiting the event started shouting at people displaying their opinion on the BDS talk.

A dialogue with the self-proclaimed dialogue-group seems hardly possible to us – democratic culture should make it possible to critically report about an event without being suspect to be a thief and excluded from the following event.

On Saturday November 7th the association „Jüdisch-Palästinensiche Dialoggruppe München“ held an event in the Gasteig in Munich. The city handed over the room for this talk without demanding any rent. In a statement before the talk the chief of the city library stated that in a democratic pluralistic society the option has to be given for all parties to speak out their opinion. Someone in the audience therefore shouted: “Why don’t you give it to the NPD” (NPD = National Democratic Party / far right/neonazi party). This free of rent handover caused a reaction by Charlotte Knobloch and the event was mentioned in international newspapers. „BDS“ – boycott, divestment & sanctions – is a internationally controversial idea of boycotting products from Israel as a reaction to settlements and “the mistreatement of Palestina”.

The barcode on products tells the costumer the origin of the good. Every country has its own…